Computer System A Programmers Perspective
This book is written from a programmer's perspective which describes how application programmers can use their knowledge of a system to write better programs.
Chapter 2

Numeric constants starting with 0x or 0X are interpreted as being in hexadecimal, (or simply “hex”).

for a machine with a w-bit word size, the virtual addresses can range from 0 to 2w − 1, giving the program access to at most 2w bytes.

Little endian： The former convention—where the least significant byte comes first.(This convention is followed by most Intel-compatible machines.)
Big endian: The latter convention—where the most significant byte comes first.
Supposing the variable x of type int and at address 0x100 has a hexadecimal value of 0x01234567.(This convention is followed by most machines from IBM and Sun Microsystems.)

Story:In fact, the terms “little endian” and “big endian” come from the book Gulliver’s Travels by Jonathan Swift, where two warring factions could not agree as to how a soft-boiled egg should be opened—by the little end or by the big.

As an application of the property that a ^ a = 0 for any bit vector a, consider the following program:

Signed vs. Unsigned in C

Although the C standard does not specify a particular representation of signed numbers, almost all machines use two’s complement. Generally, most numbers are signed by default. For example, when declaring a constant such as 12345 or 0x1A2B, the value is considered signed. Adding character ‘U’ or ‘u’ as a suffix creates an unsigned constant, e.g., 12345U or 0x1A2Bu.

When an operation is performed where one operand is signed and the other is unsigned, C implicitly casts the signed argument to unsigned and performs the operations assuming
the numbers are nonnegative. 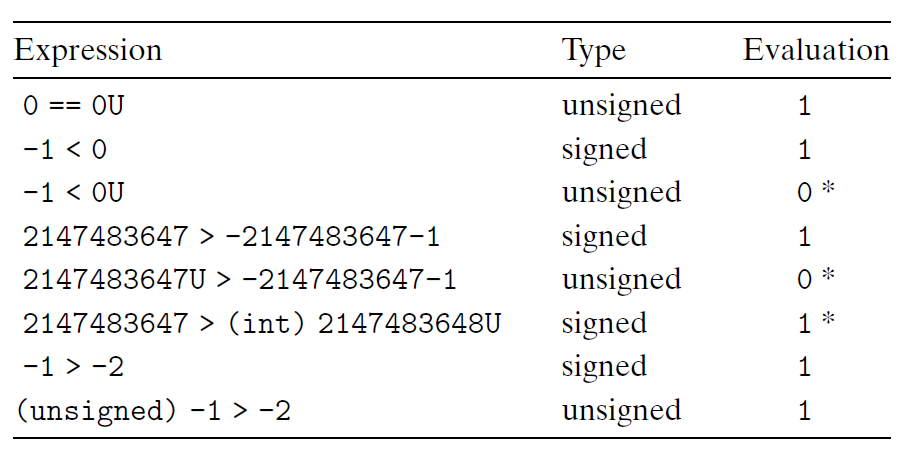 Expanding the Bit Representation of a Number

As an example, consider the following code: